Desculpe-nos, mas este texto está apenas disponível em Inglês Americano. For the sake of viewer convenience, the content is shown below in the alternative language. You may click the link to switch the active language.

2016 was my best year so far in terms of racing. The numbers show some great results which I can only say came after a lot of hard work, perseverance and determination. I competed in 3 different championships during the season: Britcar Production, Lotus UK Cup and Classic Formula Ford 1600 with the Jesus Saves Racing team.

I started the season at the Dubai 24hrs in the TCR-spec SEAT Leon. Those type of races are incredible, and it is as much about being fast as being fit, consistent and looking after the car. But sharing one of the world’s toughest tracks with another 97 cars in different classes was quite interesting!

The Classic Formula Ford 1600 was a bit more important to me as I contested the championship with Jesus Saves Racing team, something that is special for me personally. I was racing by myself out on track and the whole team was working hard throughout the season to make sure the car was set up to my way of driving wherever we went. So the feeling of watching the development of the car to its best at multiple circuits has been great to experience and observe. So the end result made everything all the more brilliant. It was my second title in motorsport and with an incredible family of people who make racing so much more than just a sport I compete in. 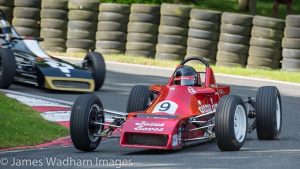 In the Britcar paddock, my job was to help my team mate Rob Hudson. We have done 4 races at the Britcar Production Championship during the season and they’ve all been incredibly hard work. On reflection driving the BMW with Rob has been great fun and we scored some really good results as a team, including a win in class followed by a 2nd overall.

Now Lotus UK Cup was another great enjoyment as I have been teaching Axel van Nederveen since his debut in the sport, and it has been great working with him. Axel is a really good student and very dedicated, so at the beginning he was already finishing in the top 7 in the Elise Trophy races. I had a few good stints in the car but the best moment of the season for me was the fastest lap at Brands Hatch as we were racing on the GP circuit, which requires incredible commitment and focus. So to be the fastest on that track with identical cars is an incredible honour.

In summary it was a really good year and I am incredibly pleased with the achievements gathered through the season. Racing without money is incredibly difficult if not impossible. But so far I have been so blessed to help people and race with them where opportunities arose. Sharing cars with Axel and Rob has been amazing, but coaching Katie Milner to what I’m sure is her first of many titles is something I’ll never forget.

Thank GOD for such a great year racing, and here’s to more and more in 2017!