Now you make my list!   Ok, it is only a humble FF1600 you are driving for our team….nay grip, nay grunt as Tom Walkinshaw would have it….but as I watched you confidently hurl the Van Dieman around Pembrey last Saturday to a staggering pole time and two dominant race wins, it confirmed to me your outstanding ability at the wheel of a race car.

Normally we engineers are stuck in the pits watching cars on the straight. We rarely get out in the country which is a mistake; when Toby Scheckter got gravel in his F3 cam belt at Croft in 1999, I went up to the hill overlooking the last bends. Jenson was smooth, quick and metronomic. He still is. In testing at Pembrey it is possible to watch the cars through Dibeni 1 and 2 and in qualifying and racing, exiting Honda. All very fast corners.   The body language of your car was a delight: smooth controlled aggression, the whole car just at the right point of 4 wheel drift. Wringing the car’s neck but gently!   A car confidently dominated by its driver.

Quite how you could be within 2 seconds of your pole time on your second flying lap of a circuit you had only done 1 lap of on foot is truly amazing!   But then, great drivers learn circuits quickly and go to the limit rapidly. And your 2 race wins were equally impressive, leading each one start to finish at just the right pace….fast enough to make the others give up hope, slow enough to not unduly stress the car.

Modern racing drivers are used to being able to thrash the car without it braking. Gone are the days when sympathetic treatment of gearbox or brakes is required to bring the car home. We know now that the clutch master cylinder began to stick 5 laps into race 2. I could hear what sounded like clutch slip exiting Honda but for the next few laps the loss of only 3 or 4 tenths of lap time did not seem to concur. So, after the race, I was mightily impressed that you had maintained lap time whilst working out that if you didn’t use the clutch, the problem went away.   And it is not easy engaging 1st gear at the Turn 1 hairpin without the clutch!

I had of course already realised your ability: the tests we did in damp and dry, the patience exhibited during the test where the engine could not be made to run cleanly all day, the 3rd place at Snetterton from last on the grid with fastest lap on a tricky surface. Your use of new tyres in qualifying for the Ronnie Peterson Trophy to get on the front row and your magnificent dice with Simon Hadfield in the race. The front row grid slot at Mallory and the whole lap spent side by side with Kestenbaum to grab 2nd place…..awesome.

But that was with a power deficit. Now we give you competitive power and you show us what you can do. Congratulations on making my Dream Team.”

“We have been aware of Adriano Medeiros since before he competed for us in Formula Ford in 2006, and we have followed his progress since with interest. I believe Adriano has demonstrated, as well as good speed, a maturity and skill level beyond his experience.

When he drive for our team, he was very fast and competitive despite very little testing. He was also kind on the machinery and did very little damage which was a bonus. Quite simply, we would welcome Adriano back to our driving strength without hesitation if the right circumstances arose. 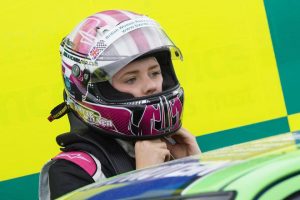 “For the past 2 years, Adriano has put me through my paces and pushed me more than I ever thought. He was a very big credit to Team Merlin during 2016 in what turned out to be a championship winning campaign! I would defiantly recommend Adriano to any driver looking for some help! A pleasure to work with, looking forward to our next few years together.”